It is incredible how Pakistan find ways of roaring back from hopeless situations. They were written off only a week earlier, languishing at ninth position with a solitary win in five games. They were yet to crack a chase - both above 330 - in two attempts this World Cup. Then when it seemed as if they would finally restrict an opponent to below 300 - New Zealand were 83 for 5 in the 27th over - Colin de Grandhomme (64) and James Neesham (97 not out) put together the side's best sixth-wicket stand in World Cup history to haul them back.

Then chasing 238, against two fast bowlers upfront - one who wickedly swings the ball and another who is often at their throat at 150 clicks - they lost Fakhar Zaman and Imam-ul-Haq. The experienced Mohammad Hafeez played and missed, beaten on the inside and outside. Then, he was hit on the helmet by Lockie Ferguson. Who really gave them a chance?

Watch on Hotstar (India only): Neesham's 97 not out

Yet, amid the chaos, they found some calm in Babar Azam, who sealed victory with an unbeaten tenth ODI century, a pristine 101 that had a capacity crowd, a majority of it Pakistan fans, crooning with 'oohs and aahs'. In Haris Sohail, he found an invaluable ally, the pair conjuring an 126-run fourth-wicket stand to see Pakistan home with five balls to spare. Haris' contribution a noteworthy 68 that built on the 89 against South Africa at Lord's. Pakistan are now within two wins of a possible semi-final berth that will have their fans talking of the eerie similarities between 1992 and 2019 for at least another week.

For large parts of their chase, it was as if they were battling to save a game on a fifth-day surface. Hafeez had a leg gully for the short ball, deep square for the hook or pull, three slips for his open-faced pokes. This was serious pressure, and yet from time-to-time, as if to ask what the fuss was all about, he played delightful pull shots and oozed lazy Rohit Sharma-like elegance in gliding the ball behind point.

Babar showed patience early on, and exhibited enough class to keep putting the bad ball away. When he was attacked with short balls, he was happy to let go of both his ego and ignore them. The pair set out to rebuild the chase, least perturbed with the asking rate, focusing on milking runs and ensuring they wouldn't lose too many wickets going into the last 20 overs, where teams believe they can chase down 150 if it comes to that. Here they only needed 110.

ALSO READ: Sharda Ugra on Babar Azam, who beats himself up just to get better

Even as this strategy played out, New Zealand kept looking to pick up wickets. Invariably, this strategy brings with it the risk of leaking runs. As Mitchell Santner came on, there was grip and square turn. Suddenly, the two batsmen, tailor-made for such surfaces, struggled and New Zealand may have just begun to wonder if they had erred by not picking Ish Sodhi, the legspinner. This was evident when Kane Williamson brought himself on, but he struck gold immediately as Hafeez had a brain fade moment and holed out to deep midwicket. 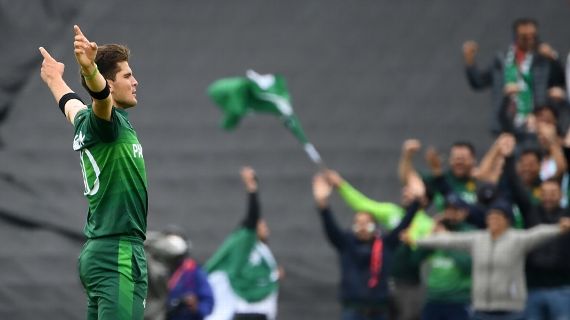 It broke a 66-run stand that allowed Pakistan to get back on track after the two early strikes threatened to blow the lid off their chase. Fortunately for them, Babar wasn't going to give it away. At the other end, Haris attacked spin and pace alike, muscling Santner first and later the returning Boult for sixes even as Williamson tried his last roll of the dice. This partnership proved to be the ice to Shaheen Afridi's fire earlier in the day, when he ripped the heart out of New Zealand's batting in a searing spell after being introduced first change in the fifth over.

Shaheen's first spell read a magical 4-2-8-2, in which he accounted for the huge scalps of Colin Munro and Ross Taylor. The Taylor wicket in particular was as much because of Sarfaraz as it was Shaheen's angle and late movement.

WATCH on Hotstar (US only) - Full highlights

Sarfaraz deserved credit for two reasons. One for being ultra-aggressive and looking to continuously make inroads, unlike in the past where has been happy to sit back and let the game drift. Two for leading the way with the catching at a time when they are trying to stave off the dubious distinction of being the poorest catching team at the tournament. The Taylor catch was right out of the top drawer, diving full-length to his right and taking it one-handed just as it was about to hit the turf.

Only a week ago, he was unfairly shamed, not just by a stray fan but also by a former cricketer who knows a thing-or-two to of playing in World Cups. Sarfaraz admitted this took a toll on him and his young family. Yet under pressure, this wasn't a bad way of shutting up the haters. In another intangible contribution no scorecard would ever reveal, he kept Shaheen on for a fifth over and he reaped the rewards with a third wicket when he had Tom Latham nicking behind.

This ripper of a spell from Shaheen came on the back of Mohammad Amir's early strike of Martin Guptill, as he chopped on trying to drive with minimal feet movement. In walked Williamson and he looked in control, knowing where the off stump was, and relying on the delicate dabs behind the wicket. If it was pitched up, he was happy to leave, frustrating the bowlers and then suddenly when they erred, he picked them off. Runs didn't exactly flow, but he rebuilt the innings slowly to make 41 off 68, when he was done in by Shadab Khan's mastery - drift, turn and bounce - to have him nicking behind in trying to jab at the ball. It was precisely at this moment you wondered if New Zealand erred by not picking Sodhi.

With half the side back, Sarfaraz slightly allowed the game to drift by introducing Imad Wasim's left-arm darts, when he really could've punted with Amir, who had only bowled four overs in his first spell. And by the time Amir returned, Neesham was well-set. De Grandhomme is a serial six-hitter for New Zealand - but here, he needed to hang in and take the game deep. And that is exactly what he did, until the 40th over, before taking off.

Neesham continued take calculated risks, never giving the impression that he was blindly swinging. After overcoming burst of genuine pace, they second-guessed the bowlers, waited for the slower balls, used the depth of the crease and whacked it downtown or square of the wicket. De Grandhomme's knock of 64 ended in the 48th over when an adventurous second to third man resulted in his run-out. Neesham batted right through, muscling the last ball for six to finish 97. This didn't bring with it the promise of victory, but the position New Zealand found themselves in was heaps better than the 166 they threatened to crash out at one stage (their score in that famous 1992 World Cup group clash). Yet, it came in second-best to Babar's masterclass that continued to give this tournament another wild twirl as it approaches the semi-final stage.