The Report by Danyal Rasool

There's a simple reason why this game was so short: because the West Indies bowlers were, too. In a spell of fast bowling more suited to Test cricket of the 1980s than limited-overs in this more cautious age, West Indies stuck to a length that kept pushing Pakistan further and further back. It wasn't far back enough, and, led by the youngest member of their squad, Oshane Thomas, they shot Pakistan out for their second lowest total ever in World Cup history; it would have been double figures but for a 22-run tenth-wicket partnership, the highest of the innings.

West Indies' chase wasn't quite as convincing as one might have expected: just a couple of months ago, a similar chase against England was achieved with contemptuous ease. But there was never any doubt about the outcome of the game whatsoever, even if Mohammad Amir put up the best bowling performance he has managed since the Champions Trophy in 2017, picking up all three of West Indies wickets in a valiant effort to make the game competitive.

They were streaky at times, fortunate others, but the bottom line was that, having dismissed Pakistan so cheaply, West Indies could afford to be as cavalier as they wished and still picked up a thumping win, one they achieved with a whopping 36.2 overs to spare, the highest number of balls remaining in a World Cup match.

It is Andre Russell, as ever, who will perhaps grab the limelight, even if Thoams was the main wicket-taker. He came in after the opening bowlers had put West Indies in command, but their dominance was nowhere near as established as after he'd finished his 18-ball burst.

Russell pitched the ball so short, so consistently, and at such high speeds, every dot seemed to count for more than just another ball used up; it was ground gained as Pakistan receded ever further, almost to irrelevance. He may have only taken two scalps but, so broken was the Pakistan batting line-up after viewing what had transpired, the wickets appeared to fall in Russell's lap when he was eventually, surprisingly belatedly, brought into the attack. Fifteen of the 18 balls he bowled were short of a length, and it was a blueprint every bowler followed to a tee, to devastating results.

ALSO READ: 'We need to win this World Cup with the bat' - Andre Russell interview

No pitch is a 105-all-out pitch, and this one perhaps least of all. Before the game, there had been gallows humour about Pakistan needing to bat first to prevent the West Indies breaking too many batting records with the raw power of their squad, but it isn't as if this upshot will be any less humiliating. Not one batsman managed to hold the innings together, and at no point did a partnership threaten West Indies' complete control over the game. Pakistan were hopping and dancing, and the tune they were doing it to was decidedly calypso.

The rot started when Imam ul Haq nudged Sheldon Cottrell behind, and even Fakhar Zaman - who was bowled - was deceived by a short delivery that crashed into his helmet and trickled onto the stumps. His 22 was the joint-highest score of the innings alongside Babar Azam, whose phenomenal record against West Indies counted for very little against a side that looks so reinvented in the year since they scrambled to qualify for this tournament. 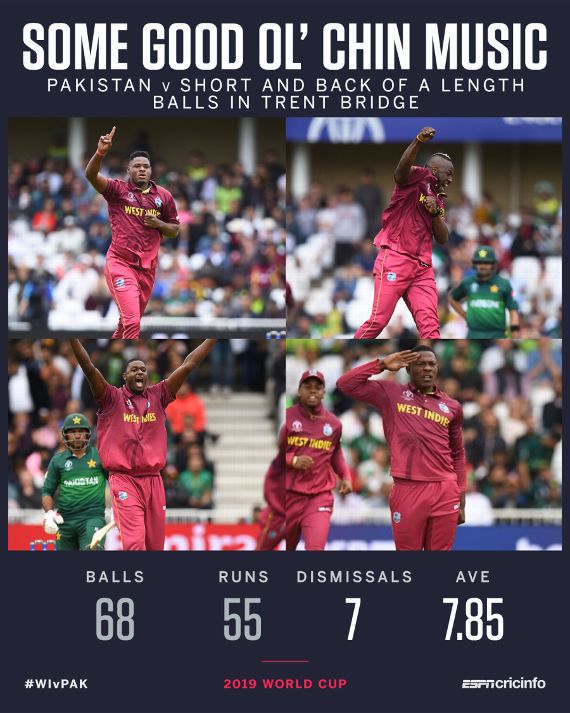 Jason Holder, ever the leader, would play his part too with three middle and lower-order wickets, and it would be flippant to wave this away as a simple plan that worked against an opposition having as atrocious a day as Pakistan endured today.

But the point remains that the favourites for this World Cup, England, faced Pakistan on this very ground just two weeks ago, and found themselves needing to chase 359 for victory. If it was as simple as bowling short - or if indeed bowling short so accurately and consistently was easy - there is a chance a team that plans as meticulously as England would have attempted it already, given that recently became the first side in history to concede more than 340 runs three innings in a row.

The chase was always going to be a formality, but Pakistan need encouragement to carry into the rest of the tournament, and Amir was at least on hand to provide them that. He hadn't taken a wicket in the first ten overs in 18 months, but two in the space of seven balls had the heavily partisan crowd chanting his name for a few brief moments, as they allowed themselves to forget the utter hopelessness of the match situation. The swing he relies on so heavily wasn't as readily available as Amir would have liked, but the occasional movement was enough to account for Darren Bravo in the slips.

By that point, though, fans of all persuasions just wanted to see Chris Gayle in full flow one last time, and he did not disappoint. Six fours and three languid sixes from the 39-year old took care of any nerves West Indies might have had. They will have sterner tests than Pakistan today, but they look impressively well equipped to handle them. Nothing remotely as encouraging can be said of Pakistan after this debacle, which is concerning for a side that has now come up short in 11 matches in a row.