Seven-nil. On its biggest stage, cricket's most fraught rivalry really hasn't lived up to its billing.

None of the six previous World Cup meetings between India and Pakistan produced anything approaching a tight finish, but most of them contained tense passages of play and moments of crackling electricity. Sunday at Old Trafford had none of that. There was plenty of quality cricket, but nearly all of it was from one side. The other side was a shadow, not just of what it had been in the past, but even of what it had been two weeks ago.

Pakistan barely showed up, and the contest turned into an uninterrupted celebration of Indian excellence.

Watch on Hotstar (India only) - Full highlights of the match

Rohit Sharma scored his second hundred in three games, a far breezier knock than his effort in a scrappy chase against South Africa, and at one stage he seemed set for a tilt at a fourth ODI double-hundred. KL Rahul, batting in his preferred position thanks to the enforced absence of Shikhar Dhawan, made a solid half-century in an opening stand of 136. Virat Kohli came to the crease, occupied it like a favourite bit of lawn furniture, and made 77 at comfortably over a run a ball without ever seeming to stretch himself.

These efforts set Pakistan a target of 337. This was a flat pitch, and India lost one of their two main fast bowlers, Bhuvneshwar Kumar, to hamstring stiffness after he had delivered just 2.4 overs, leaving the fifth and sixth bowlers 17.2 overs, rather than just 10, to handle. And yet, apart from a brief period during a 104-run second-wicket stand between Fakhar Zaman and Babar Azam, Pakistan never threatened to make a chase of it.

The Fakhar-Babar partnership only rarely hit high gear, partly because of the discipline from India's bowlers - even Vijay Shankar and Hardik Pandya - and partly because Pakistan were looking to keep wickets in hand, perhaps with an eye on staying close to the DLS par score, given that rain had already caused a couple of brief interruptions.

A series of authoritative slog-sweeps from both batsmen brought Pakistan 26 runs from overs 21 to 23, one of them bringing up Fakhar's half-century. At the 23-over mark, Pakistan were 113 for 1, 11 behind the DLS par score of 124 for 1.

That was as close as they got, as Kuldeep Yadav put India firmly on top once more with the wickets of both set batsmen. They didn't arrive out of the blue; Kuldeep was consistently challenging the batsmen in the air and off the pitch, and he had already come close to having Fakhar stumped, ripping one across his bat face and causing him to overbalance. 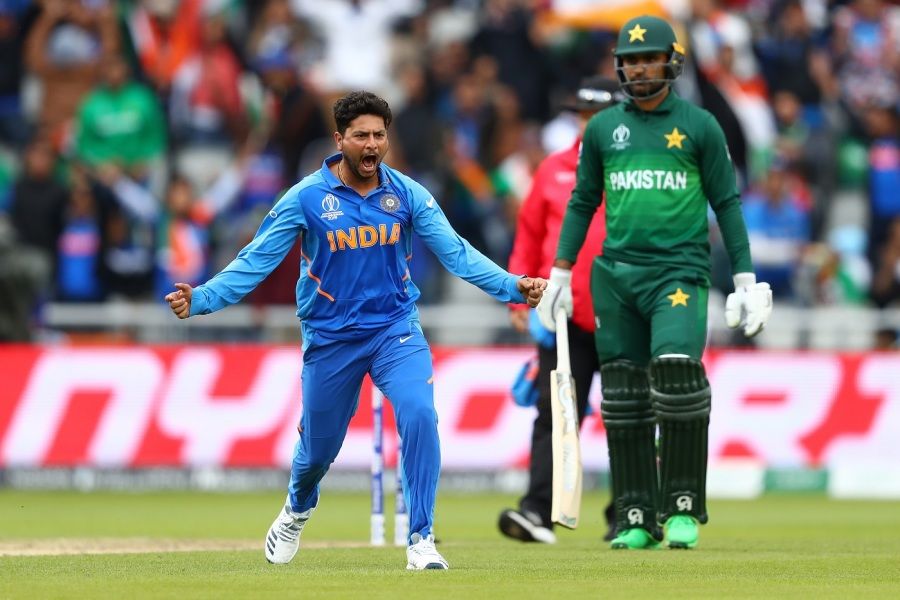 The breakthrough arrived in the 24th over, courtesy a cocktail of drift, dip and turn. Drift drew Babar into playing at a wider line as Kuldeep floated one across him from left-arm over, opening a gap between bat and pad. Dip ensured the ball landed shorter than Babar wanted, causing him to push further out in front of his body than he would have wanted. Turn did the rest.

Dip forced Fakhar to top-edge a sweep in Kuldeep's next over, and Pakistan were 126 for 3. When Pandya followed up in the next over with the back-to-back wickets of Mohammad Hafeez and the dreadfully out-of-sorts Shoaib Malik, the contest was all but over.

The game dragged on for a while longer, though, thanks to a 40-minute spell of rain that shaved 10 overs off the chase. When play resumed, Pakistan needed 130 in 30 balls, with four wickets in hand, in front of stands that had gone two-thirds empty. It was the tired and farcical end that this contest - hyped to absurd levels for months and painted in dangerously jingoistic shades - probably deserved.

The match was probably won and lost in its first ten overs, when Pakistan chose to bowl in overcast conditions and failed to make use of them. Unlike most of the grounds at this World Cup, Old Trafford has long straight boundaries and short square ones, and with the clouds massed overhead it was the one place at which to bowl a fuller length. Barring Mohammad Amir, none of Pakistan's fast bowlers did this.

The quicks bowled nine of the first 10 overs for Pakistan, and of the 54 balls they sent down, 30 were pitched either short or short of a length, according to ESPNcricinfo's data. Rohit and Rahul scored 35 off those 30 balls, with Rohit in especially punishing mood with his square-cut and his range of pulls. The other 24 balls, mostly from Amir, were pitched on a good length or fuller, and off those balls India only scored 13 runs.

In comparison, India's seamers bowled 36 balls on the fuller lengths in their first Powerplay, conceding 18 runs, and 24 on the shorter lengths, conceding 17. 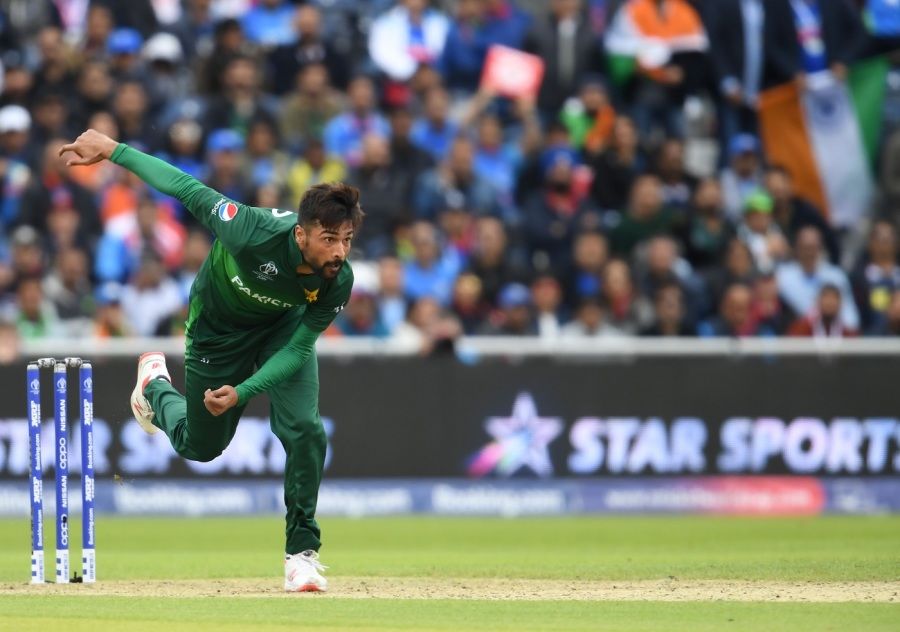 Mohammad Amir was the pick of the Pakistan bowlers Getty Images

Rohit usually starts sedately in ODIs and beds in for the long haul, accelerating gradually through his innings. Pakistan's freebies had allowed him to begin in much more of a hurry now. At the 10-over mark he was on 37 off 29 balls, and a drive to the cover point boundary off Shadab Khan in the 12th over brought up his fifty off 34 balls. It was his quickest in ODIs.

The pace of Rohit's scoring allowed Rahul to play at his own pace at the other end, and ease into a role he hasn't really played too much of in his ODI career so far. Having moved to 14 off 31 at the 10-over mark, he accelerated when the spinners came on, bringing out his sweep, square cut, and lofted hits with a full extension of the arms. In all, he scored 12 off 30 against the faster bowlers and 45 off 48 against the spinners.

When Rahul spooned Wahab Riaz to short cover in the 24th over, India had already laid the base for a massive total. Rohit and Kohli, masters of pressing home advantageous situations, did what they do best, putting on 104 runs of increasing inevitability in 19.1 overs. Rohit brought up his century - his third-quickest in ODIs - off 85 balls, off the last ball of the 30th over, and proceeded to add 40 more to his score off his next 27 balls. Another double-century seemed to be his for the taking, but right after he had hammered Hasan Ali for a typically Rohit boundary - a mighty pull over mid-on - he fell playing an entirely atypical shot, shuffling across and scooping to short fine leg.

India came into the World Cup with questions over their No. 4, but through the tournament they've found a solution by taking so long to lose their second wicket that they can promote Pandya. They did so again, and he clattered 26 off 19, but there wasn't really a proper end-overs explosion to follow his dismissal, as Amir's angle and changes of pace tied down India's lower middle order. India only made 38 off their last five overs, but by then they already had more than enough.